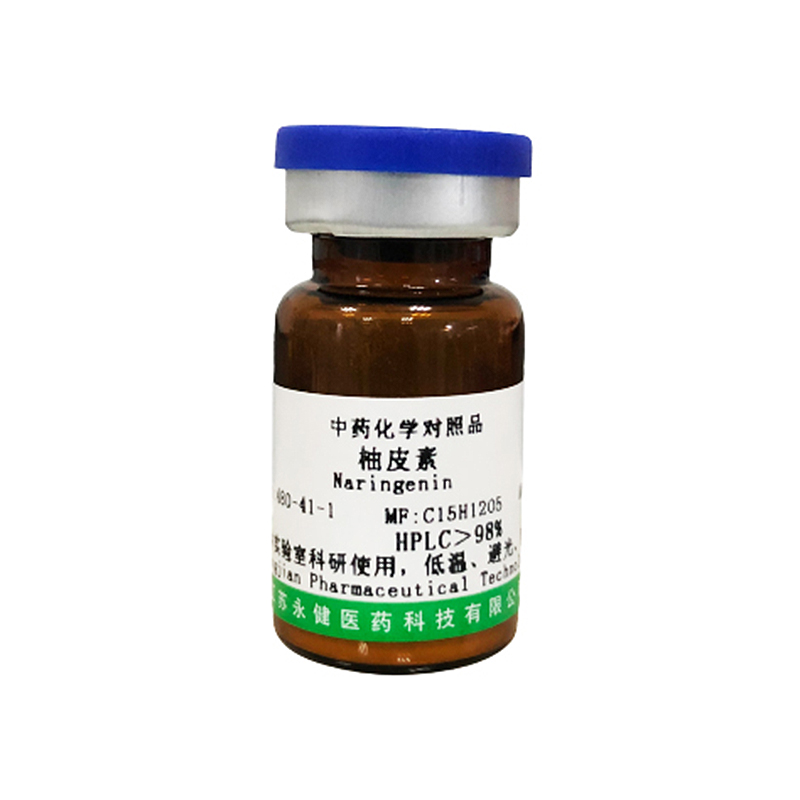 Naringenin is a natural organic compound with molecular formula c15h12o5. It is yellow powder, soluble in ethanol, ether and benzene. The seed coat mainly comes from cashew nuts of lacqueraceae. It is used for qualitative and quantitative analysis of traditional Chinese medicine containing naringin [1]. At the 7 carbon position, it forms a glycoside with neohesperidin, which is called naringin. It tastes very bitter. When dihydrochalcone compounds are formed by ring opening and hydrogenation under alkaline conditions, it is a sweetener with a sweetness up to 2000 times that of sucrose. Hesperidin is abundant in orange peel. It forms a glycoside with rutin at the 7 carbon position, which is called hesperidin, and forms a glycoside with rutin at the 7 carbon position β- Neohesperidin is the glycoside of neohesperidin.

Production process: it is mainly completed by alcohol extraction, extraction, chromatography, crystallization and other processes.

Physical and chemical properties: soluble in acetone, ethanol, ether and benzene, almost insoluble in water. The reaction of magnesium hydrochloride powder was cherry red, the reaction of sodium tetrahydroborate was red purple, and the molish reaction was negative.

Naringin is the aglycone of naringin and belongs to dihydroflavonoids. It has the functions of antibacterial, anti-inflammatory, free radical scavenging, antioxidant, cough and expectorant, blood lipid lowering, anti-cancer, anti-tumor, antispasmodic and cholagogic, prevention and treatment of liver diseases, inhibition of platelet coagulation, anti atherosclerosis and so on. It can be widely used in medicine, food and other fields.

Antibacterial
It has strong antibacterial effect on Staphylococcus aureus, Escherichia coli, dysentery and typhoid bacillus. Naringin also has an effect on fungi. Spraying 1000ppm on rice can reduce the infection of Magnaporthe grisea by 40-90%, and has no toxicity to humans and livestock.

Antiinflammatory
Rats were intraperitoneally injected with 20mg / kg every day, which significantly inhibited the inflammatory process caused by wool ball implantation. Galati et al. Found that each dose group of naringin had anti-inflammatory effect through mouse ear tablet experiment, and the anti-inflammatory effect increased with the increase of dose. The inhibition rate of high dose group was 30.67% with thickness difference and 38% with weight difference. [4] Feng Baomin et al. Induced phase 3 dermatitis in mice by DNFB method, and then gave naringin orally for 2 ~ 8 days to observe the inhibition rates of immediate phase (IPR), late phase (LPR) and ultra late phase (VLPR). Naringin can effectively inhibit ear edema of IPR and VLPR, and has certain development value in anti-inflammatory.

Immune regulation
Naringin maintains an appropriate balance of oxidative pressure in specific time and specific regions by regulating the flow of electrons in mitochondria. Therefore, the immunomodulatory function of naringin is different from traditional simple immune enhancers or immunosuppressants. Its characteristic is that it can restore the unbalanced immune state (pathological state) to a near normal immune balance state (physiological state), Instead of unilaterally enhancing or inhibiting immune response.

Female menstrual regulation
Naringin has the activity similar to non steroidal anti-inflammatory drugs. It can reduce the synthesis of prostaglandin PGE2 by inhibiting cyclooxygenase Cox, and play the role of antipyretic, analgesic and alleviating inflammation.
Based on the estrogen like effect of naringin, naringin can be used for estrogen replacement therapy in postmenopausal women to avoid serious adverse reactions caused by long-term estrogen use.

Effects on obesity
Naringin has obvious therapeutic effect on hyperlipidemia and obesity.
Naringin can significantly improve the high plasma cholesterol concentration, TG (triglyceride) concentration and free fatty acid concentration in obese rats. It was found that naringin could up regulate monocyte peroxisome proliferator activated receptor in high-fat model rats δ， Reduce blood lipid level.
Through clinical trials, it was found that patients with hypercholesterolemia took one capsule containing 400mg naringin every day for 8 weeks. The concentrations of TC and LDL cholesterol in plasma decreased, but the concentrations of TG and HDL cholesterol did not change significantly.
In conclusion, naringin can improve hyperlipidemia, which has been well confirmed in animal experiments and clinical trials.

Scavenging free radicals and antioxidation
DPPH (dibenzo bitter acyl radical) is a stable free radical. Its ability to scavenge free radicals can be evaluated by its 517 nm absorbance attenuation. [6] Kroyer studied the antioxidant effect of naringin through experiments and confirmed that naringin has antioxidant effect. [7] Zhang Haide et al. Tested the process of lipid peroxidation of LDL by colorimetry and the ability to inhibit the oxidative modification of LDL. Naringin mainly chelates Cu2 + through its 3-hydroxyl and 4-carbonyl groups, or provides proton and free radical neutralization, or protects LDL from lipid peroxidation through self oxidation. Zhang Haide and others found that naringin has a good free radical scavenging effect by DPPH method. The free radical scavenging effect may be realized by the hydrogen oxidation of naringin itself. [8] Peng Shuhui et al. Used the experimental model of light riboflavin (IR) - nitrotetrazolium chloride (NBT) - spectrophotometry to prove that naringin has an obvious scavenging effect on reactive oxygen species O2 -, which is stronger than that of ascorbic acid in the positive control. The results of animal experiments showed that naringin had a strong inhibitory effect on lipid peroxidation in mouse brain, heart and liver, and could significantly enhance the activity of superoxide dismutase (SOD) in mouse whole blood.

Antitumor Activity
Naringin can regulate immune function and inhibit tumor growth. Naringin has activity on rat leukemia L1210 and sarcoma. The results showed that the thymus / body weight ratio of mice increased after oral administration of naringin, indicating that naringin can enhance the immune function of the body. Naringin can regulate the level of T lymphocytes, repair secondary immune deficiency caused by tumor or radiotherapy and chemotherapy, and enhance the killing effect of cancer cells. It is reported that naringin can increase the weight of thymus in ascites cancer bearing mice, suggesting that it can enhance the immune function and mobilize its internal anti-cancer ability. It was found that pomelo peel extract had inhibitory effect on S180 sarcoma, and the tumor inhibition rate was 29.7%.

Antitussive And Expectorant Effect
Using phenol red as an indicator of disease elimination effect, the experiment shows that naringin has strong cough and expectorant effect.